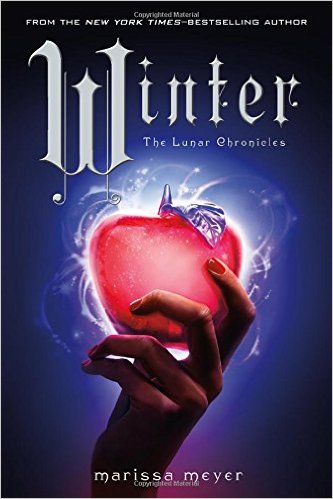 Synopsis via Goodreads
Princess Winter is admired by the Lunar people for her grace and kindness, and despite the scars that mar her face, her beauty is said to be even more breathtaking than that of her stepmother, Queen Levana.

Winter despises her stepmother, and knows Levana won’t approve of her feelings for her childhood friend—the handsome palace guard, Jacin. But Winter isn’t as weak as Levana believes her to be and she’s been undermining her stepmother’s wishes for years. Together with the cyborg mechanic, Cinder, and her allies, Winter might even have the power to launch a revolution and win a war that’s been raging for far too long.

Can Cinder, Scarlet, Cress, and Winter defeat Levana and find their happily ever afters?

My Thoughts:
I love this series with all of my heart. It’s right up there with Throne of Glass and Harry Potter for me. This was an amazing wrap up to an amazing series. I love the blend of Fairy Tales and Sci-fi and the sassy and sarcastic characters. Summing up this book is hard since it is the last book in a series and any sum up will involve spoilers of some sort. I love how these books are technically fairy tale retellings but they have a life of their own and I love the little fairy tale touches that the stories have, like how the suspension tank was decorated to look like a glass coffin, just like in Snow White.

“She shot me in the arm once.” This confession was said with as much tenderness as if Scarlet had given him a bouquet of wildflowers rather than a bullet wound.

Oh my god I burst out laughing at that point (as anyone else seen Vikings? This part reminded me of that moment when Lagertha hit Ragnar with her shield and he just looks up at her and goes “My love!”) The forlorn nostalgic way Wolf said that made me think of that exact moment in Vikings.

“Um, hi I’m Carswell Thorne, a convicted criminal in your country. Have we met?”

“I’ve been waiting for you to admit you wanted my body,” said Thorne.

“Don’t faint,”
“What?”
“You look stressed out,”
“Oh sweetheart, we are so far ahead of you.”
Thorne is one of my favorite characters for the little quips that he says, he has such a big personality that it practically leaps from the pages and he brings a lightness to the story. Plus his character development was top notch, it was such a gradual change from scoundrel to hero that I didn’t catch it until it happened.

But I think the best character development goes to Emperor Kai, in the first book I really didn’t know how I felt about him, to me he felt just as bland as Prince Charming did in Cinderella, I was thrilled to see his character progress as the series went on and by this book he felt like a real person to me. Plus I enjoyed seeing how the characters were constantly comforted by his presence. He had some great lines throughout the story as well, this one was my favorite:  “You mean she doesn’t intend to blow me up before the ceremony? How disappointing,”

I am always impressed on how Scarlet is able to handle the wolves, that takes one hell of a strong woman and she has her massive alpha presence going on and I think it’s great that she’s the one to have it. I would definitely want her on my team.

Cinders speech to the citizens of Luna was FIERCE. My jaw dropped and I was just fangirling so hard. I still can’t quite gather my thoughts on it so I’m not going to try too when my only thought is basically bow down to Selene.
My favorite quote of the book:
Broken isn’t the same as unfixable

I loved these books and I thought the wrap up was amazing, I wasn’t sure where the story was going to go, and don’t get me wrong I want more, but I do like how it ended. I’m happy with it.

One thought on “Winter Review”