I had a really good month of reading for September, it was amazing! I am so happy with the amount of books that I was able to read and I was able to get to a few books that I had been wanting to read for months now, so that was awesome. 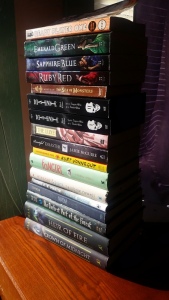 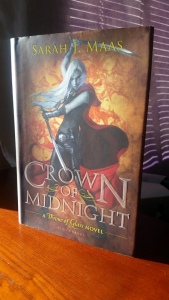 Crown of Midnight
by Sarah J Maas
My Rating: 5 out 5 stars

This is one of my favorite books, the journey you take on this is incredible, and there was a lot of character development while also highlighting the characters weaknesses. I don’t want to go too much into the story since it is a sequel. But I will say this….TEAM CHAOL!  TEAM CHAOL!  TEAM CHAOL! I will defend that ship until the day I die. 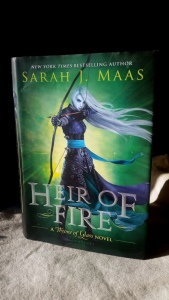 Heir of Fire
by Sarah J Maas
My Rating: 5 out of 5 stars

I was so glad to give this a reread, the first time I read this I was always so interested in what was happening to Celeana so I didn’t enjoy the rest of the story, aka Manon, I was fascinated with her the second time around. I could not get enough of her character, I always enjoy villains that are evil just for the sake of being evil, and I feel like Manon was. I always love rereading books because I pick up more details that I might have missed the first time or didn’t think that they were significant to pay full attention to. 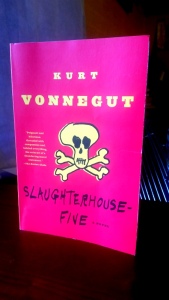 Slaughterhouse 5
By Kurt Vonnegut
My Rating: 2 out 5 stars

This book was alright, I didn’t hate it, but I also didn’t necessary like it. At the same time, I’m also not sure what I was expecting from this book. After letting it sink in a little more I think I was expecting more about the war, and more protesting against the war in general. I’m really glad I read this, though, I’ve been wanting to read this since I first heard about it, I remember it was mentioned in Footloose. The 80’s version with Kevin Bacon, I haven’t seen the new version, don’t want to either. So this was a bucket list book crossed off the list.

I am so interested about this series! I just want to see how the series is going to progress and I’m interested in L, fascinated by Light and the almost sociopathic way his mind twists, and I honestly just adore Ryuk. I think the Shinigami is hilarious. 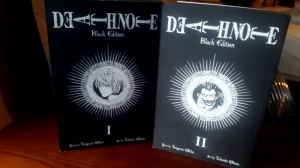 I had a funny thought about Deathnote and comparing Light and L to Moriarty and Sherlock Holmes, mostly about their brilliance and deductions skills. I am loving this series, though, it’s amazing. 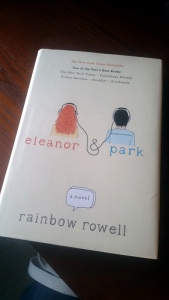 Eleanor and Park
by Rainbow Rowell
My rating: 4 out of 5 stars

This story was adorable! I could not get enough of it! My heart just broke many times over for Eleanor, and the story left me with so many questions at the end. It’s almost enough to make me wish for a sequel since I just want to know what happens next but at the same time I don’t want a sequel written. I’d rather imagine it in my head. 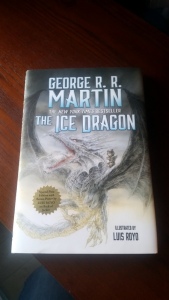 A quick enjoyable read, I was more fascinated by the world around Adara and her preference of winter more than I was about the characters themselves. The illustrations were just beautiful too. Oh! I want an Ice Dragon for Christmas! 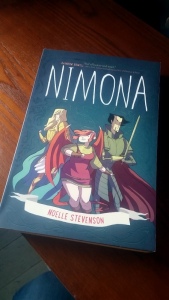 Nimona
By Noelle Stevenson
My Rating: 4 out 5 stars

While this was an enjoyable and hilarious read, I had so many questions at the end of it, and they were never really answered, which is always a bummer. But I loved the humor in it, and, for the most part, I enjoyed the characters, I really liked Sir Goldenloins, and Sir Blackheart. I will be giving this a reread in the future to see if I can get my questions answered. 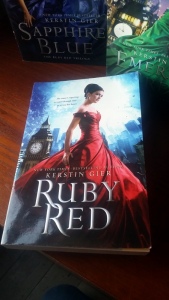 Ruby Red
by Kerstin Gier
My Rating: 2 out of 5 stars

At first I really enjoyed this story, but towards the endish (around page 200 or so) I just kind of lost interest, and there was nothing there to really hook my interest. It was almost a struggle to get through until I got to the last 40 or so pages and then things really started picking up. I do plan on reading Sapphire Blue next since the ending really started picking up interest and I’d like to see how the story develops from there. 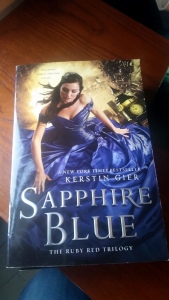 Sapphire Blue
by Kerstin Gier
My Rating: 2.5 out of 5 stars

This was slightly better than Ruby Red, but only slightly again the middle of the book was hard to get through, it was quite boring in some parts. I’m still disappointed that there are fascinating topics such as time travel and secret societies and alchemy! But these topics get swept under the rug to make room for stupid “does he like me or not” crap and I just don’t care for it. I also don’t like how Gwen doesn’t stand up for herself against her aunt, or Charlotte, or Giordano. But once against it was such a great ending that I will continue on to the next book 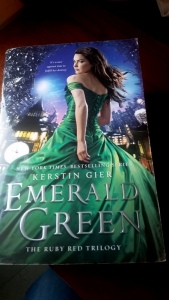 Emerald Green
by Kerstin Gier
My Rating: 2 out 5 stars

The only way I can sum up this series is that I wanted more sci\fi and I got romance, did not appreciate that it kinda felt like a bait and switch. I knew there was going to be a romance, I didn’t know it was going to be so infuriating. I loved Xerimous though because he summed up how I felt reading it. Ugh, I’m glad it’s over. 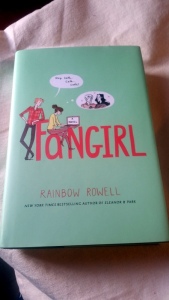 Fangirl
by Rainbow Rowell
My rating: 4 out 5 stars

I really loved this!  It was cute and adorable, kinda awkward and funny. I thought it was very well done and well written. I thought Cath was endearing but super awkward, I was disappointed though how Wren was painted in a bad picture just because she wanted independence and to find out who she was, maybe I just don’t get it because I’m not a twin so I can’t understand that bond that’s formed between siblings at that point. Still enjoyed it, there great character development for both Cath and Wren, with the obstacles that they both face. 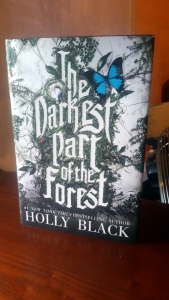 The Darkest Part of the Forest
by Holly Black
My Rating: 5 out 5 stars

Oh my god, I loved this book, Just loved it! omg so much awesome! I loved so many things about this book, I honestly don’t even know where to start, let’s see you have a sweet boy and boy romance, a girl knight, like seriously a girl knight! Epic fight, faeries, magic, and so many awesome things, there were parts of the story that didn’t quite hold my attention, but I was able to push through those moments pretty quickly and get sucked in fast. 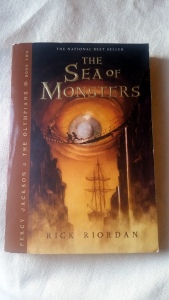 I’m not sure what it is, but I am just not loving the Percy Jackson series, I think from here on it’s going to get better because I don’t really know what’s coming now, I have seen the two Percy Jackson movies so I kinda knew what was coming, but also I’m just not into the storyline to be honest. It’s not grabbing me and sucking me in, I haven’t connected to the characters at all. I just don’t know about this. 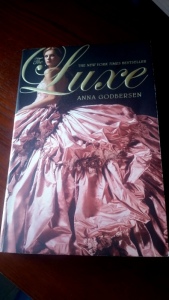 The Luxe
by Anna Godbersen
My Rating 4 out 5 stars

This is kinda a reread for me, but it has been so long since I first read it, it was slow coming back to me so it felt like I was reading it for the first time at parts of it. It’s also kind of a guilty pleasure read, but I love the historical fiction, forbidden love, I especially love Diana’s outreach for the unconventional, and Elizabeths struggle between doing what’s right and what would make her happy. Theres a sweet slow romance and it’s just adorable. 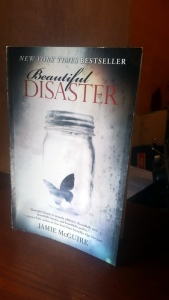 Beautiful Disaster
by Jamie McGuire
my Rating 3 out 5 stars

Okay I liked this well enough reading it, and before I had finished it I was ready to give it a solid 4 stars, so I really liked it, I liked the two characters, Abby, and Travis, I didn’t so much like America because I was annoyed that she really couldn’t make up her mind for the most part about Travis and Abby dating. While I liked Abby and I liked the sense of mystery and the slow revealing of who she is, I didn’t care so much about how she went about dating Parker, I thought it was really shitty to do and then purposefully hurting Travis at times was uncalled for. As for Travis, I loved his bad boy, I just love a good bad boy and he was a good one. When they were together though I thought he was obsessive, possessive, and unhealthy. They really were a disaster.

Now the ending ruined the entire book for me just because I hate the last three or so pages, I found it to be extremely tacky and almost insecure. Overall, it really ruined the book for me which was disappointing.

I’ve also been reading the Sailor Moon manga collection throughout the month but I plan on doing a separate post just to talk about the series, I’m not sure how exactly I want to structure the post since it would contain massive spoilers. 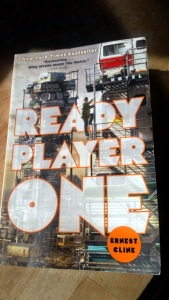 Ready Player One
by Ernest Cline
my Rating: ALL THE STARS 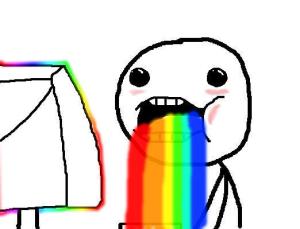 Yes thats really what I looked like reading it, also 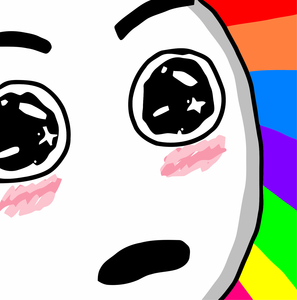 I was enthralled and speechless throughout this book. Loved it. This was amazing from page one, I loved the characters especially Art3mis and Aech, I was so happy that two out of the Top 3 gamers were girls, I thought that was so cool, I found myself laughing all throughout the book, I loved all the references within the book. It was an amazing journey and I am kicking myself for not reading it sooner